As a filmmaker, I’m gonna be honest: I like shooting cool shots.

It is quite satisfying to film an orbit dolly or rack focus, but only if it fits the scene. Every shot needs a purpose. Before adding a shot to your shot list, give a reason why it fits. In other words, figure out the Y of the shot.

Of course, specific shots have distinct unique purposes with every use, but this post is meant to act as a general reference for when to use these different types of shots.

In my opinion, every scene should have at least one master. It does not need to make it to the final cut (editing pun aside), but it should be filmed in case there is a problem with the other shots. If there is a continuity error, it is nice to have a reliable overview shot to cut back to.

The master is probably the most basic shot out there. It is a general (typically medium or wide, still) shot that films most if not all of the events in the scene. It can be used to provide an unbiased view of the action. Since they are not connected to any character or item, it does not take on any point of view, providing the viewers with an objective perspective.

Over the Shoulder (OTS): Space & Distance

OTS shots are filmed from behind the “shoulder” of a person or item. They help build the space and distance of the scene. I personally prefer to have another item in the foreground of certain shots to create that sense of space and distance in the room. One example of this is the TV in Seven Taps, which shows the size of the room and creates depth.

OTS shots are often great for conversations between two characters as it provides each perspective and is easy to cut from one to the other.

TWIST: A cool spin on OTS is the claustrophobic over the shoulder shot, where the shoulder takes up most of the frame. These are used to create a nervous or uncomfortable feeling within the viewers. I used this shot in Darkness when Lucy is looking at the cello. 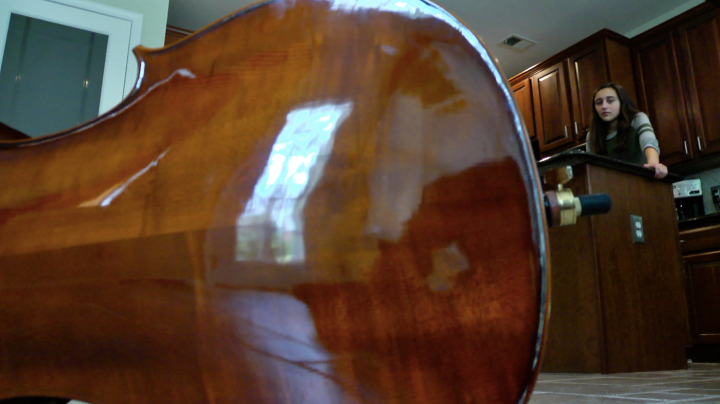 Are you uncomfortable yet?

Panning is usually done side-to-side. It is a change in camera angle, typically done using the arm of a tripod. Pans work well at transitioning between two members of a conversation. This is often done as a whip pan, which has a quicker movement. Pans can also be done vertically, as in looking up or down at something. These should be used sparingly, however.

CAUTION: Often, whip pans will lead to moving a little too far or close, but never try to change the location after the fact. Either accept that the difficult shot won’t be perfect, or redo the shot altogether. Once you pan, there’s no going back.

One of my favorite shots, the chandelier shot, reveals the scene in a wider scale by starting on a chandelier and then panning to the rest of the room. This usually occurs in large areas, and almost always uses a wide lens. The shot builds the scene, as the viewer can see the entire area. Also, the slow pan and dolly provides movement. This shot provided an interesting scene-opener in Darkness. Are my eyes always different sizes?

Anyway, focus can also be used for misdirection. For example, I might direct the viewers’ eyes to one part of the screen while something happens elsewhere. I could also purposely mess with the focus to confuse the viewer or provide the skewed viewpoint of a character. This is exactly what we did in Seven Taps using the LensBaby.

A dolly is a track a camera is pushed or pulled across, but dolly shots can be accomplished without an actual dolly. Dolly shots involve the physical movement of the camera, and can also be done handheld. Slow dollies establish subtle movement in the shot, and can be done side-to-side or forward/back. One type of dolly is called an orbit dolly, and moves in an arc around the subject. It is very hard to use, but creates a nice smooth movement in the end.

TWIST: This may be one of the most difficult shots ever. Oh no. He can’t be talking about the dolly zoom. Alas, I am. The dolly zoom, or zolly, is achieved through a combination of zooming and dollying. While you dolly in one direction, zoom in the other, so the subject remains the same size while the background moves. This shot will leave the viewers with a sense of vertigo, often used in quick moments of extreme fear or confusion.

CAUTION: Dolly zooms are not subtle, so make sure you use them very sparingly. Very. They can become annoying quite quickly. Also be cautious that a zoom lens is required for this shot.

Racking Back the Focus

Those are some examples of how each shot has a purpose. When planning a film, never forget the Y, or the reason you are choosing a shot. The minute you forget that is the minute your viewers lose interest. Well, maybe not the exact minute.

Cut to black (Y: to leave the readers with an attempt at a joke).

Austin Segal has been making films since he was grabbing the home video camera from his mom at just three years old. Since then, he has worked to improve his filmmaking abilities by attending NJ Film School for seven years, making short films on his own, and writing on his filmmaking blog, segalcinematics.com. His portfolio includes countless dramas, a few comedies, some promotional videos, a PSA, and a documentary. View all posts by austinsegal

This is seriously one of the coolest filmmaker, behind-the-scenes sites, I have seen. I will definitely be telling my other students about it.

Austin Segal is one of the most talented and dedicated filmmakers whom I have had the pleasure of working with. Whether he's acting, directing, or behind the camera, it's clear that he's truly dedicated to the craft.